It was on the 27th of January 1877 that a group of Christian friends met in a house in nearby Silvester Road to pray. The result of that meeting was the birth of East Dulwich Tabernacle. 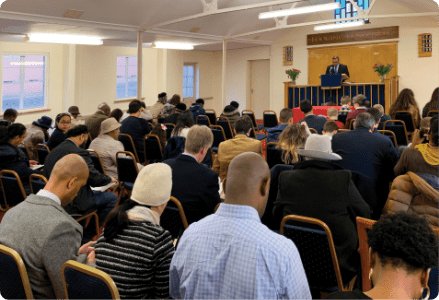 A church with a capacity for 350 was erected by 1882. The Lord’s people meeting at this placed rejoiced seeing souls seeking the Saviour with 37 baptised in one year and a membership of 85 in the years leading up to 1914.

A large Sunday School hall was added in 1928 and in 1937 the church suffered a set back when it was demolished due to a structural fault. In the summer of 1944, during the Second World War, an enemy bomb completely destroyed the Sunday School hall. For the next seven years, meetings of divine worship were conducted in a house. In 1951 a new chapel was built and this was extended in 1990 to the structure in existence today.

We thank the Lord that through the following years He has maintained His witness in the area. Though for a season the workers were few, what they lacked in numbers they made up for in faithfulness.

2012 marked the 135th anniversary of East Dulwich Tabernacle Baptist church. With a pastor installed, and the childrens’ Sunday School resumed, spiritual life again is flourishing at this historic site of Christian witness.

Will you join us?


Our regular services take place on Sundays, Mondays and Wednesdays.

At our Sunday morning service, a simple Gospel message is preached. The Bible teaches us very important things about life, death, eternity and the way to find peace with God through repentance and faith in the Lord Jesus Christ. We warmly invite people of all ages, backgrounds and belief systems to come and hear the Good News of God's love and salvation.

At our Sunday and Wednesday evening services, we closely study a book or theme of the Bible with the aim of faithfully applying God's Word to our own lives. On Monday evenings, we meet for prayer. All are welcome to join us for these services.

The Authorised (King James) Version of the Bible is used at all our services and meetings. We believe it is still the best English translation of the Word of God. Hymns are chosen from Psalms & Hymns of Reformed Worship.

East Dulwich Tabernacle
Basis of Faith
The church at the Barry Road; East Dulwich Tabernacle started on 27th January 1877; and continued representing its Lord and head the Lord Jesus Christ; by preaching the redeeming grace and teaching the word of Truth. The Church's basis of Faith is the 1689 Baptist Confession of Faith. Therefore we members of this Church hold and adhere to the following Summary statement of our belief.
1. The full inspiration of the Holy Scriptures; their authority and sufficiency as not only containing but as being in themselves the Word of God. The reliability of the Scripture witness to itself as the only, the complete and infallible Word of God, the New Testament witnessing to the reliability and divine character of the Old Testament; the necessity also for a reverent faith in the Word, and the teaching of the Holy Spirit, for a true understanding of the whole.
2. The unity of the Godhead and the divine co-equality of the Persons of the Father, the Son and the Holy Spirit eternally; the sovereignty of God in creation, providence and redemption.
3. The true and proper deity of our Lord Jesus Christ; His virgin birth; His real and perfect manhood; the authority of His teaching and the infallibility of all His utterances; His substitutionary death on the cross as being the full and sufficient and only atonement for sins; His bodily resurrection and ascension into heaven; His present priestly intercession for His people; His personal return in glory.
4. The justification of the sinner solely by faith, through the atoning merits of our Lord and Saviour Jesus Christ.
5. The total depravity of human nature in consequence of the Fall of Man from the original state of perfection in which he was created; by which Fall all mankind is in a state of condemnation and separation from a holy God, and can only be delivered by the divine work of regeneration and redemption.
6. The sovereign grace of God, by which we mean His free and unmerited favour; and that by His sole choice the elect have been predestinated to salvation.
7. The work of regeneration, conversion, sanctification and faith as being not an act of man's free will and power but of the mighty, efficacious and irresistible grace of God, through the Holy Spirit.
8. All those who are chosen by the Father, redeemed by the Son and sanctified by the Spirit, shall certainly and finally persevere, so that not one of them shall ever perish but shall have everlasting life.
9. The resurrection of the body; the judgement of the world by our Lord Jesus Christ, with the eternal blessedness of the redeemed, and the eternal punishment of those who finally reject Christ as Saviour.
10. The observance of the divine institution of the Baptism of Believers by immersion, in loving obedience and as an act of witness, but not as conveying any regenerating grace. The observance of the Lord's Supper as a commemoration of our Lord's death but not as being a sacrifice for sin nor involving any change of the substance of the bread and wine.
11. The sole authority and prerogative of Christ through the Holy Spirit, speaking in His Word, for the government of the Church.